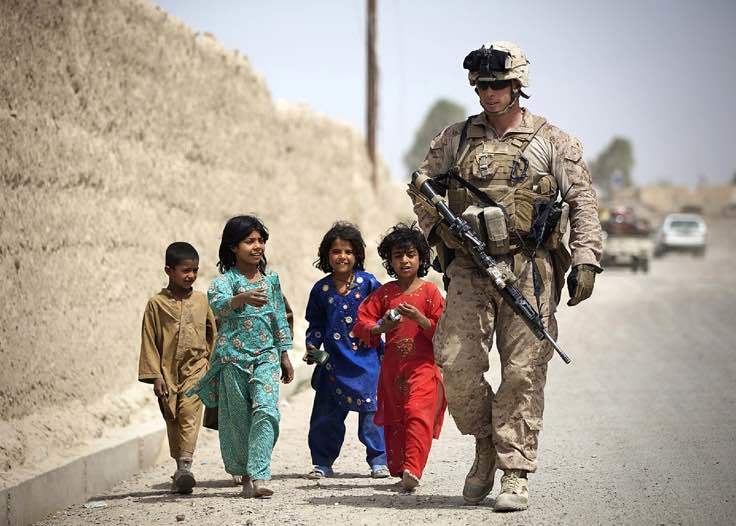 Editor's Note: Today’s guest post is from Andrew Webber, co-director of Service to School's JD application program. He wanted to write about how he used the GI Bill to attend law school and to create a resource for other prospective law students who are looking for creative ways to finance their own law school education. Having no first-hand knowledge myself, I jumped at the opportunity to get his experience on the site. Enjoy!

“Hop in man, we’re outta here in five.” Brian shouted through the bullet-proofed window of his armored vehicle.

I swung my rifle to my side, preparing to heave my duffle bag out of the dust.

“Sir!” A familiar voice called out. I turned, a familiar figure waved, desperate for my attention, held back by angry Afghan policemen.

“Wait up.” I shouted up to Brian’s gunner as I went to meet my interpreter.

“My ID card.” Abbas pleaded, ignoring the hard stares of the local policemen guarding base’s entrance. “It’s expired. I need a new one, I need it today, so I can come in.”

“Can’t it wait ‘till tomorrow?” I asked.

Abbas, an undersized out-of-towner, gestured to the policemen on either side of him. “If I stay the night out of the base, they will do bad things, sir. It will be so bad for me.”

“Fine.” I answered. “Wait here; I’ll walk to you to the badging office.” Gritting my teeth, I waved Brian’s team off; I’d call them first thing in the morning to join their patrol.

Helping Abbas with his identification card saved my life. An improvised explosive device detonated near Brain’s vehicle very soon after he left, killing everyone inside. It is a near certainty I would have been in his vehicle had Abbas not diverted me. My continued existence on this earth is due to dumb luck. My current status, a law student with no debt and great job prospects, is also due to dumb luck.

When I entered active military service in 2005, law school wasn’t on the radar. I was just in it for the action. Post-service educational assistance wasn’t nearly as generous as it is today; not that I cared. Eventually though, after spending most of the last decade outside the United States, I decided enough was enough, and began exploring other career options. For various personal motivations, a legal career seemed like my best option but the uncertainty of employment in relation to the cost terrified me. Luckily, Senator Jim Webb sponsored and passed an updated “Post-9/11 GI Bill” in 2008 and because of the generous support of the American public, I found myself eligible for hundreds of thousands of dollars in educational benefits, to include:

Hooray for dumb luck! Without the Post-9/11 GI Bill, my options would have been: pay sticker for a very expensive law school or pay a little less for a school with high-risk employment outcomes. Because of the Post-9/11 GI Bill, my only decision inputs were: (1) employment outcomes and (2) overall fit (whatever that means). I was certain I wanted to try and be a lawyer, so the only negative-value admission decision I could have made was to either (1) go to a school with poor employment prospects for the same price as a school with excellent employment prospects, or (2) not attend law school at all. Neither were particularly tempting.

I took the easy route and chose to go to a school with excellent employment prospects and a low cost of living. My first year, I found myself surrounded by disciplined, purposeful, and highly intelligent people. Most had at least some work experience, like I did, but few, if any, enjoyed the same expected financial value in attendance. I often asked people, especially the ones complaining about student loans, why they didn’t consider doing a stint in the military. They mostly answered with blank stares, sometimes a nervous smile. Clearly most had never considered it; a surprising consensus given law students are supposedly equipped with a special aptitude for finding relevant facts and parsing evidence with a cold, calculating logic.

For the purposeful decision-maker, perhaps a recent college graduate considering how to pay for law school, the thought of getting a quarter-million for school would seem appealing on its face; a move with a high expected value. It is extremely difficult to save that amount in three years otherwise (three years is the minimum time of service required to be 100% Post-9/11 GI Bill and Yellow Ribbon eligible) and perhaps equally difficult to, in the alternate, land a full scholarship at a high-employment school that paid for housing, books, healthcare, and other incidentals.

“Yea,” a future Chicago Law Professor would posit, “but you almost died. You are not accounting for the true risk vs. reward of military service. Dead people are unlikely to find meaningful legal employment, or even gain acceptance, to a high-employment school.”

True. I did almost die, on multiple occasions. But the numbers show that I am an exception, indeed, a special snowflake with a chest-drawer full of essentially valueless participation awards. The vast majority of people who served in the U.S. military since 2001 did not experience active combat. In the U.S. Army alone, by far the most active branch of the military in Iraq and Afghanistan, roughly 200,000 US military men and women have been recognized for combat participation since 2001. From 2001 to 2016, roughly 3.9 million American veterans served in the military. Someone serving during the “Global War on Terror” from 2001-2016 then, had about a 5% chance of seeing combat. Outside of the Army and Marine Corps, the odds are drastically reduced. The risk today, in 2017, is even lower.

I took on substantial risk during my time in the Army, but the risk was self-imposed. It had no impact on finances as applied to law school opportunity, or for that matter, as applied to finances in any form. The only tangible financial gain I netted for being a risk-taker in the military was 150.00 USD/month I drew for volunteering to be in an airborne unit for a few years. The risk I assumed was extremely disproportionate to my potential reward and mutually exclusive of the financial benefits I now receive. In short, there is no incentive, nor need, to be like me. Be smarter than I was. Even within the army, there are many jobs that are low-risk, high-satisfaction, and 100% Post 9/11 GI Bill eligible. One could take nearly zero physical risk and still receive all the same financial benefits I did.

To prospective law students with that cold-calculating, high-LSAT-scoring mind, I suggest this; why not consider taking the financial cost of attendance out of your calculation? Post-9/11 GI Bill vs. no-Post 9/11 GI Bill is easily a multi-million-dollar swing in financial futures.* For those oddities who want to earn the dubious distinction of being a combat veteran, do what I did: volunteer for difficult things like Ranger School and badger human resources until they send you to the Afghanistan-Pakistani border, or wherever its “hot”. You probably won’t be put in harm’s way though, even if you want it. For normal people with a balanced outlook on life, limit your exposure by choosing one of the other thousands of jobs available in the military that don’t involve active participation in combat. Do yourself and your nation a solid by taking debt out of the equation and embracing financial freedom.

*A possible exception would be someone who used loans to pay for the totality of their law school-related expenses, then participated in a loan-forgiveness scheme, like PAYE.

(Biglaw Investor: Thanks for the great post Andrew. I agree with the thesis that many people probably did not consider military service as a way to pay for a legal education. I like how you compared the three years of service to what you could possibly save working a post-college but pre-law school job. Sounds like you’re well ahead of your peers and on track for a great financial success thanks to your service.)

Let’s talk about it. Did you use the GI Bill to pay for law school? Did you even consider it as a possibility when you were contemplating going to law school?

Six thoughts on Law School for Free for Veterans