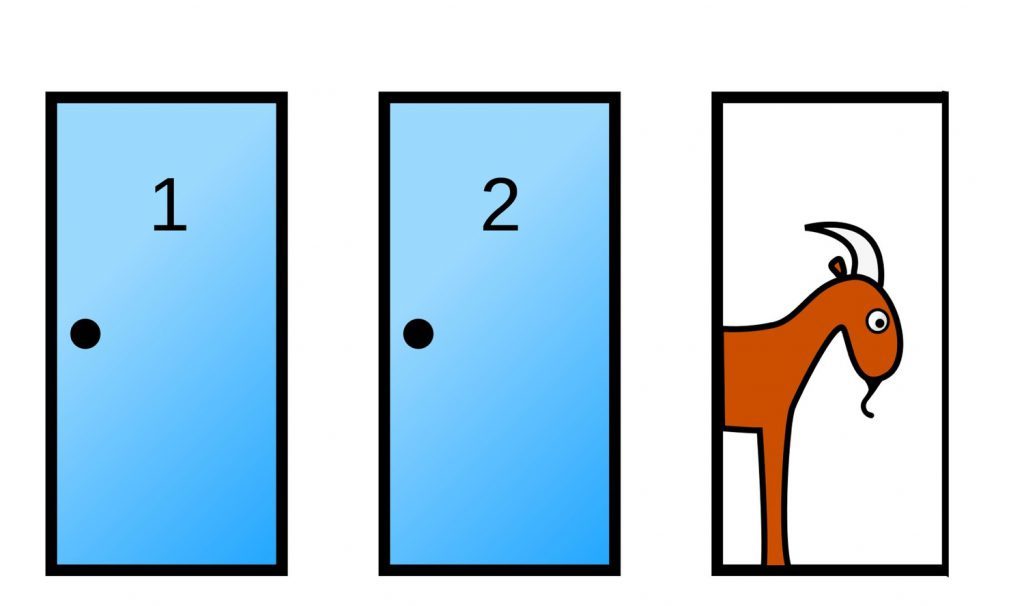 Suppose you’re on a game show and you’re given the choice of three doors: Behind one door is a car; behind the other two doors are goats. You pick a door. The host, who knows what’s behind the doors, must then open one of the two remaining doors and will only open a door containing the goat.

“Do you want to keep your choice or switch to the remaining door” the host says. What do you do? Do you switch? Does it even matter?

Give this some thought before you continue.

Here’s the weird answer – Yes, it does matter. It matters a lot. There’s only one clear choice: You should switch to the other door.

If you switch, you have a 66% chance of winning the car, while if you stick to your original choice you only have a 33% chance.

When you made the original guess you had a 33% chance of being correct (1 out of 3 doors). If you decide not to switch, those odds do not change even when you learned additional information about the doors after your original selection.

Here’s a graphical description of The Monty Hall Problem: Images courtesy of the Math Forum.

The truth is, many of us would make the mistake of not switching. Even PHD mathematicians got caught up. Here is one response:

You are utterly incorrect about the game show question, and I hope this controversy will call some public attention to the serious national crisis in mathematical education. If you can admit your error, you will have contributed constructively towards the solution of a deplorable situation. How many irate mathematicians are needed to get you to change your mind? – E. Ray Bobo, Ph.D. Georgetown University

Ouch. I wonder if he wrote an apology letter.

The simulation – and the resulting confusion – makes me wonder how well we understand other odds in our lives. What are the chances that a stock will go up or go down?

The stock market is a much more complicated version of the goat problem. Worse, there’s no host to help us along by revealing which investments are losers. But even if there were a host, would I listen and take the good advice?

This reasoning is part of why I switched from investing in individual stocks to investing in low cost index funds. I realized that the times I picked a stock that gained in value were just as random as the times I picked a stock that lost value. It all came down to luck. Operating with imperfect information and without a host (or being unable to take the good advice of a host) meant my individual investments were always going to be a game of chance.

Only later did I discover the founder of Vanguard, Jack Bogle, and his great investment advice:

It’s true. I’d rather keep what’s behind all three doors rather than worrying about which one has the prize.

Let us know what you think in the comments. Did you solve the puzzle correctly? Are you investing in individual stocks or index funds?

Two thoughts on How Well Do You Understand Odds?